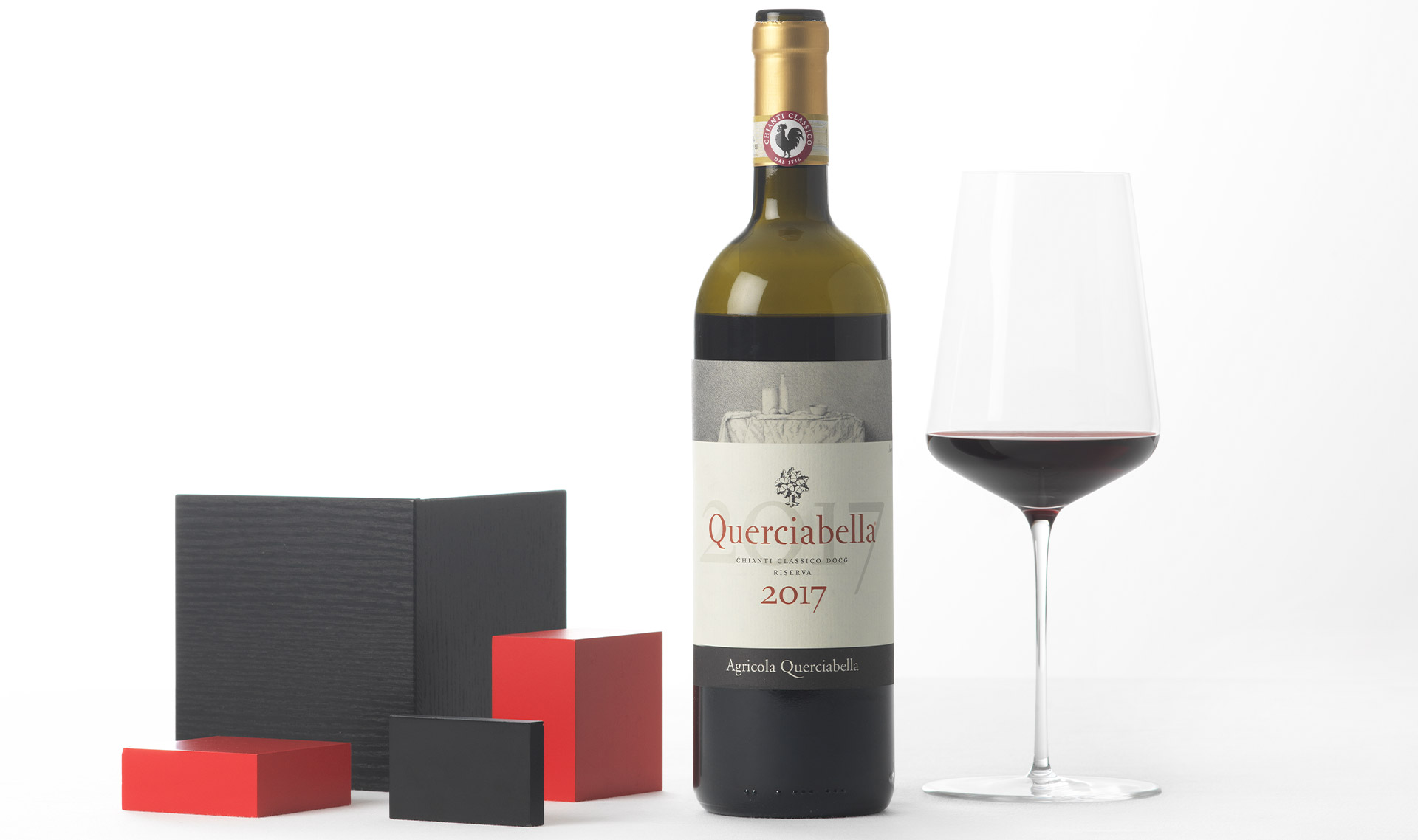 Querciabella Riserva 2017 is our latest release from Chianti Classico and the highest expression of our Sangiovese vineyards.

Over the last four decades, Querciabella has achieved a reputation for outstanding site-specific Chianti Classico. The gradual acquisition of propitious vineyards in villages beyond our native Greve in Chianti has given us the rare privilege of growing grapes in some of the appellation’s finest corners.

Querciabella Chianti Classico Riserva is the optimal result of this steady commitment to exceptional terroir. It’s a tribute to both Sangiovese and the sheer thrilling levels of hedonism the Chianti Hills can express, built to age long and gracefully. The first vintage of Riserva was in 1979. Interestingly, we chose not to produce any between the 1999 and 2011 vintages.

The evolution of Querciabella Riserva

In the earlier years of our history, specific parcels from the hillside of Ruffoli were selected and given smaller barrel and newer oak treatment to make an age-worthy Riserva. It showcased the peculiar leanness, vibrancy and elegant acidity that the combination of Galestro and Sandstone soils from high slopes can bring out.

However, this was a practice that we stopped in 1999. Back then, Camartina, Querciabella sensational Super Tuscan, was produced from a very similar Sangiovese-lead blend, prompting us to re-think the purpose of our Riserva bottling.

However, over the first decade of the twenty-first century, the blend of Camartina gradually shifted toward Cabernet Sauvignon, with Sangiovese moving into a supporting role. Most importantly, Querciabella holdings expanded in and around Greve, with the acquisition of vineyards in Radda and the lease of 27 hectares in Gaiole in Chianti. With the focus firmly set on finding where the ultimate Sangiovese grew, our winemaking team introduced a detailed micro-vinification system that has since become the centre of our philosophy.

So, by the time the 2011 vintage rolled around, it once again made sense to start producing a Chianti Riserva at Querciabella, now made entirely with Sangiovese from the top vineyards in Greve Radda and Gaiole in Chianti.

The whole is greater than the sum of its parts

Similarly to other great wine terroirs of the world, the soil characteristics and the sites conditions vary often and considerably in Chianti Classico. In Greve, our vineyards of Sangiovese enjoy a natural south orientation. The sandstone rocks and sands soils obtained from the flaking of galestro are richer in clay at lower altitudes and progressively become looser and more draining as they reach close to 550 m a.s.l. Similar characteristics can be found in Radda, but the higher presence of galestro slate results in persistent tannins and darker fruit profiles. The soils in Gaiole are rich in calcium carbonate and deliver a riper expression of the Sangiovese fruit and a marked acidity thanks to limestone rocks, also known as Albarese.

Elegance and vibrancy from Greve, the structure and power of Gaiole’s darker fruit, the intriguing aromatic intensity, nerve and structure of Radda: from the great knowledge of our vineyards, we have now the ideal ingredients for what we feel to be the ideal Chianti Classico.

Striving toward an optimal representation of the terroir

Many have noticed that our Riserva bottling could, by the current regulations, be labelled as a Gran Selezione. In 2014 the Consorzio Chianti Classico introduced this new category to provide a higher level to the territory’s range. While we support every step made to elevate the overall quality status of the appellation, we are among those producers, and critics, that have not yet abided by the classification and have instead devoted themselves to making Sangiovese the vehicle to express the unrivalled diversity of this unique terroir. At Querciabella, we await with anticipation the moment when the commune or village will be allowed to appear on the label of a Chianti Classico wine.

The 2017 vintage is one of the driest on records. The growing season endured severe April frosts and searing summer temperatures that primarily impacted vines at lower altitudes reducing the crop yield. However, thanks to the painstaking work of our vineyard team and the providential rains that arrived from the beginning of September, we harvested healthy grapes with vibrant profiles, good concentration and depth. The high skin-to-juice ratio of the berries and ripe tannins made it a fine start for elegant wines of tension and structure.

Querciabella’s 2017 Chianti Classico Riserva is fabulous. The warm, dry vintage notwithstanding, Querciabella turned out a gracious, mid-weight Riserva that is incredibly elegant. The 2017 changes constantly in the glass, revealing different sides of its personality over time. It’s the perfect wine for the dinner table.
94/100 —Antonio Galloni · Vinous

The racy personality of Sangiovese

Querciabella Riserva 2017 shows its dashing side from the first sip, with crunchy fruit, vibrant acidity and substantial tannins. Juicy red fruit, tart cherries, plums, spices, tobacco and herbal scents, all these fragrances and flavours vie for attention on the palate, yet the wine never loses its lifted poise and freshness. The long finish leaves a beguiling almond aftertaste.

Sangiovese is a perfect food wine. It thrives with umami-rich foods, and given its magnificent body and structural components, it calls for a dish that lets its complexity shine. We invite you to pair Querciabella Riserva with a substantial dish like Eggplant Parmigiana with vegan cheese, or a plant-based version of Tuscan sausage and white bean stew.

Querciabella Riserva 2017 is available to buy.

This website uses cookies to improve your experience while you navigate through the website. Out of these, the cookies that are categorized as necessary are stored on your browser as they are essential for the working of basic functionalities of the website. We also use third-party cookies that help us analyze and understand how you use this website. These cookies will be stored in your browser only with your consent. You also have the option to opt-out of these cookies. But opting out of some of these cookies may affect your browsing experience.
Necessary Always Enabled

Any cookies that may not be particularly necessary for the website to function and is used specifically to collect user personal data via analytics, ads, other embedded contents are termed as non-necessary cookies. It is mandatory to procure user consent prior to running these cookies on your website.